The Greek city states were believed to have stopped wars to conduct the ancient Olympic Games. Now, as the 2008 Beijing Olympics gets underway, a new war has started 😦

A map of Georgia showing the breakaway regions of South Ossetia (Yugo-Osetinskaya) and Abkhazia . . . 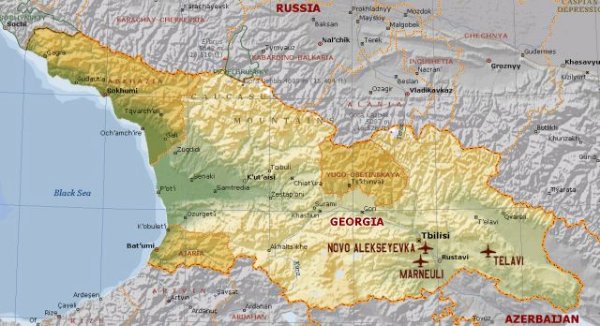 Georgia’s President – Mikheil Saakashvili, had ordered a military offensive to seize control of the region. Georgian forces took several villages and entered the South Ossetian capital, Tskhinvali, that has reportedly been devastated in the campaign and more than a thousand civilians are feared dead 😯

A Grad multiple rocket launcher being used by the Georgian forces . . .

In response, Russian tanks, backed by aerial support from fighter jets, rolled into South Ossetia to protect Russian citizens from the Georgian assault. Russian troops were fighting the Georgians on the outskirts of Tskhinvali. The conflict is all set to escalate with Georgia’s other breakaway region, Abkhazia, preparing to open another front in the conflict. The two regions have a mutual defence pact.

Thousands of volunteers, mainly from the Russian Republic of North Ossetia-Alania have signed up to fight against the Georgian forces in South Ossetia. North Ossetia and South Ossetia have strong ties. The conflict may escalate into a full-fledged war between Georgia and Russia 😐

Georgia has immediately called back its 2,000 troops stationed in Iraq as a part of the occupation forces. A good move, as Georgian troops (and other occupation forces) have no right to be in Iraq in the first place!

Condoleezza Rice has called for Russian troops to withdraw from South Ossetia and respect Georgia’s territorial integrity. This is outrageous, coming as it does from an administration that has scant respect for international law, human rights and the sovereignty and territorial integrity of other countries! People who talk of things like “bombing a country back to the Stone Age” and “having all options (read as armed aggression and occupation) on the table” and their allies (read as shameless stooges) around the world would do well to shut up and keep their hands off this conflict!