Ernesto “Che” Guevara was martyred on October 9, 1967. Forty one years later, an image of this Argentine-born Cuban revolutionary, doctor, guerrilla leader, author and military theorist remains the most famous photograph in the world! 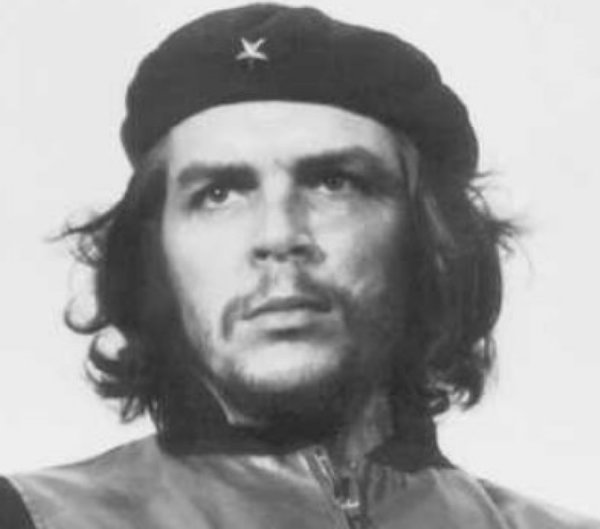 There is so much to write about the most famous revolutionary in the world that I don’t know what to write. So I’ll just mention a few ways in which the icon of rebellion is remembered across the world (taken from wikipedia articles):

Nelson Mandela has referred to him as: “An inspiration for every human being who loves freedom”

Jean-Paul Sartre described him as “not only an intellectual but also the most complete human being of our age.”

Guevara remains a beloved national hero in Cuba (almost a secular saint, to many on the Caribbean island), where he is remembered for promoting unpaid voluntary work by working shirtless on building sites or hauling sacks of sugar. To this day, he appears on a Cuban banknote cutting sugar cane with a machete in the fields. Cuban school children begin each morning by pledging “We will be like Che.”

In his native Argentina, where high schools bear his name, numerous Che museums dot the country and in 2008, a 3.65 metre (12 foot) bronze statue of Che was unveiled in his birth city of Rosario. Che was also voted “Argentina’s greatest historical and political figure.”

In the land where he was executed, Bolivia, Che Guevara has been transfigured and “canonised” by the local Bolivian campesinos. No longer is Che Guevara considered as a guerrilla insurgent, but he is now viewed as a “Saint” by locals who had come to refer to him as “San Ernesto de La Higuera” (Saint Ernesto of La Higuera). Accompanying his “Sainthood” came prayers for favours and legends of his ghost still walking the area.

In Bolivia, images of Che now hang next to images of Jesus and the Virgin Mary. Che’s murdered body is now compared to John the Baptist and in many homes, Che’s face competes for wall space with a host of Roman Catholic Saints. Some rural campesinos now believe that if you whisper Che Guevara’s name to the sky or light a candle to his memory, you will find your lost goat or cow.

For instance, Manuel Cortez says: “It’s like he is alive and with us, like a friend. He is kind of like a Virgin Mary for us. We say, Che, help us with our work or with this planting, and it always goes well.”

Throughout the world, Che is regarded by the youth as an icon. He is the world’s most famous rebel, a man who symbolises the spirit of revolution. Even those who despise Che’s egalitarian ideals and rebellious spirit shamelessly make use of his image to sell their products!

Here is the footage of the victorious Cuban revolutionaries, after the overthrow of the infamous military dictatorship of the notorious tyrant Gen. Fulgencio Batista . . .

Che was captured in Bolivia while he was leading a revolution in that country. On October 9, Bolivian President René Barrientos ordered that Guevara be killed. The executioner was Mario Terán, a sergeant in the Bolivian army. Moments before Guevara was executed he was asked if he was thinking about his own immortality. “No,” he replied, “I’m thinking about the immortality of the revolution.” Che Guevara also allegedly said to his executioner, “I know you’ve come to kill me. Shoot, coward, you are only going to kill a man.”

Cowards can only kill the icon of rebellion, they can never kill the revolutionary spirit. The spirit of San Ernesto de La Higuera will not leave this planet until the ills that plague the world are cured. El Guerrillero Heroico is simply immortal!

(After reading this, in case you think that I’m a “communist” or a “Marxist”, I can only laugh my heart out at you 😆 People tend to be so biased in their views about economic concepts that they get the shock 😯 of their lives when they come across someone who is free of bias 😐 )

A Republic is born!