Pakistan’s top nuclear scientist is a free man, at last!

Posted on February 9, 2009 by An alien Earthling

Dr. Abdul Qadeer Khan, the Pakistani nuclear scientist and the man responsible for building Pakistan’s nuclear capability, was finally freed from house arrest by the Islamabad High Court last Friday. Dr. Khan, known to the world as A Q Khan, was accused of “proliferating” sensitive nuclear technology to a few countries. Under international pressure, the then Musharraf regime placed the scientist under house arrest after the now retired military dictator “pardoned” Dr. Khan, widely regarded as a national hero in Pakistan, after he supposedly confessed to “proliferating” nuclear secrets. The scientist later said that the “confession” was made under pressure. 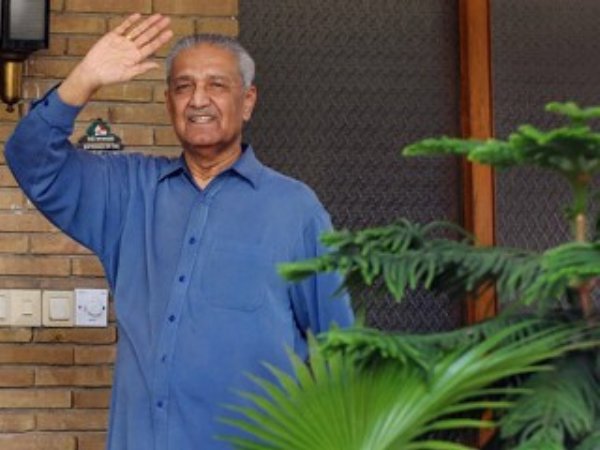 The fledgling but virtually powerless democratic government in Pakistan has been taken aback by international criticism and is considering filing an appeal to overturn his release. Despite the fact that the 72-year old scientist had been stripped of all his powers and the fact that his “proliferation network” had been dismantled long ago, the ailing scientist was not released after the democractic government took over in Pakistan.

The democratic government should not consider filing an appeal to overturn his release. The ailing 72-year old scientist deserves to be a free man. Dr. Khan has committed no crime. Even in the episode of alleged “proliferation of nuclear secrets”, Dr. Khan was made a scapegoat by the military regime to cover up the involvement of members of the establishment who must have played a part in exchanging nuclear details with a country like North Korea in return for missile technology.

Why has Dr. Khan committed no crime? First, Pakistan is not a member of the Nuclear non-Proliferation Treaty (NPT) and is not a member of the Nuclear Suppliers Group (NSG) either. So the laws relating to “nuclear proliferation” do not apply to Pakistan. Pakistan did enact laws after the Khan episode against the transfer of nuclear technology, but Dr. Khan cannot be tried under those laws. The only law the scientist would have breached would be the secrecy laws for government officials. But again, it should be clear that one man alone cannot transfer such sensitive technology to other countries without the involvement of powerful members of the establishment. He was made a scapegoat and forced to take all the blame by members of the esatablishment who did not want the world to know the complete story. And the scapegoat was made to suffer under house arrest for so long. He deserves to be free now. And he should be given extra security by the government of Pakistan as rogue intelligence agencies like the Mossad and the CIA would probably want to kidnap him or assassinate him.

Dr. Khan is just a nuclear scientist. None of his alleged “proliferation” activities has led to any nuclear holocaust like the heinous crimes that were perpetrated on the people of Hiroshima and Nagasaki in World War II. If anything, people like J. Robert Oppenheimer and Gen. Leslie R. Groves who were responsible for developing the first nuclear bomb are far, far greater criminals than someone like A Q Khan. For a world that did not punish the notorious war criminals who dropped the atomic weapons on Hiroshima and Nagasaki to call A Q Khan “a rogue nuclear scientist” is absolutely ridiculous. The real rogue scientists are the ones like Robert Oppenheimer who developed the filthy nuclear weapons that were used to annihilate the helpless civilians of Hiroshima and Nagasaki.

Then, there is this “proliferation” nonsense. Its outrageous that five countries (the U.S.A., Russia, China, France and the U.K.) claim every right to stockpile as many nuclear weapons as they like, develop “useable nukes” and even threaten to use it against other countries, and yet seek to prevent the “proliferation” of these weapons to other countries at the same time. It’s a different matter that countries like India, Pakistan and Israel have developed the nuclear bomb and North Korea may have done so.

“Non-Proliferation” is sheer bullshit without total nuclear disarmament! As long as the five self-proclaimed “nuclear powers” who have a “veto” in the United Nations Security Council do not want to give up the huge stockpiles of their disgusting weapons, other countries have every right to develop nuclear weapons to protect themselves from the countries that possess them! If humanity wants to prevent a repeat of the barbaric crimes that were perpetrated on the people of Hiroshima and Nagasaki, then all sensible people in the world must force the five self-declared “nuclear powers” along with any other country that possesses nukes to dismantle the stockpile of their filthy weapons completely. It’s these stockpiles that are a threat to world peace and security, and not the nonsense called “proliferation” that’s dished out by the “nuclear powers” to preserve their notorious hegemony in an unequal world. 😡 As long as the five self-proclaimed “global policemen” want to hang on to their filthy weapons, non-nuclear weapon states are well within their rights to nurture scientists like A Q Khan!

6 Responses to Pakistan’s top nuclear scientist is a free man, at last!