A deadly charge from the bottom to the top!

It’s not easy to be classified as a champion team when you finished dead last in last year’s championship. However, the Deccan Chargers from Hyderabad (Andhra Pradesh) have done just that – from the zeroes of the Indian Premier League (IPL) 2008 to the undisputed champions of IPL 2009, it has been one dream journey for this deadly combination of crack cricketers led by Adam Gilchrist. 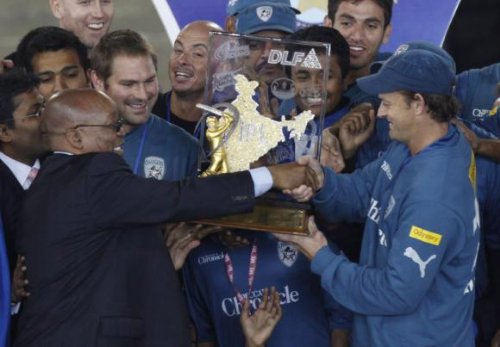 No one doubted the potential of this team – they have a great mix of youth and experience, a cool combination of seasoned international pros and talented young Indian cricketers. But, in last year’s inaugural edition of the Indian Premier League Twenty20 cricket, the team simply failed to click. All that is history now!

Gilchrist took over as the captain from VVS Laxman for this year’s IPL that was shifted to South Africa since the Indian government could not provide security for the tournament, as the dates coincided with the General Elections. It was a blessing in disguise for the League as it helped to increase its popularity beyond Indian shores. Full credit goes to Cricket South Africa for organising a fantastic tournament at a very short notice. We all look forward to the big one – the 2010 FIFA World Cup. South Africans have proved to be great organisers and wonderful hosts!

For the Chargers, it was a superb team effort that took them all the way. Gilchrist and his fellow Aussie, the DC coach Darren Lehmann have managed to bring out the best in all their boys. Young cricketers like Tirumalasetti Suman, Rohit Sharma, Pragyan Ojha and Harmeet Singh have proved themselves on the big stage while seasoned international pros like RP Singh (who won the Purple Cap for taking the most number of wickets in the tournament), Herschelle Gibbs, Ryan Harris and Andrew Symonds made great contributions at crucial stages to keep the charge going. Not to forget Gilly’s sterling contribution – he not only shouldered the burden of keeping wickets while leading the team, but got the Chargers’ off to a flying start with his aggressive batting as an opener. Chasing a big target in a pressure semi-final against the highly rated Delhi Daredevils, Gilchrist played the knock of the tournament, single handedly demolishing the Daredevils’ attack with his incredible hitting. It was champion stuff from a champion cricketer!

The Royal Challengers Bangalore is another team that deserves apprecation. The boys from Bengaluru (Karnataka) finished second last in the IPL 2008 and made an ordinary start in this year’s edition. Anil Kumble lifted the RCB to a new level when he took charge as skipper. The Challengers put together a string of successive victories over top teams and knocked out last year’s runners-up, the Chennai Super Kings, in the second semi-final. They lost the final narrowly to the Chargers in a pressure cooker situation.

There is no doubt about the heroes of this year’s IPL, though. It has to be the Chargers from Hyderabad! A word of praise for T. Venkattram Reddy, the DC team owner. He solidly backed his team and could be seen in the team dugout with his boys when some other team owners chose the comfort of the hospitality box. The team is owned by the Deccan Chronicle, a reputed broadsheet and South India’s largest selling English language newspaper. I guess when you are the undisputed numero uno in one field, it tends to rub off on your other business ventures too!

4 Responses to A deadly charge from the bottom to the top!