Swine flu pandemic: loudmouth Azad needs to shut up and do some work for a change!

With the H1N1 swine flu pandemic sweeping across India and leaving 48 people dead (as on August 21, 2009) and infecting thousands more in its wake, one would expect the health minister of the government of India (Ghulam Nabi Azad) to be working furiously, co-ordinating and taking steps to contain its spread and treating sick people. Sadly, work is not something that politicians like Mr. Azad are fond of. Unfortunately, but expectedly, he has chosen a novel strategy of fighting the swine flu virus.

It’s physically impossible for a pig to look at the sky. A swine can only look at the ground beneath its feet in order to keep munching rotten things with its big mouth. The brilliant Mr. Azad has chosen to replicate the strategy of the swine to fight the swine flu virus. Mr. Azad hopes that he can contain the H1N1 pandemic by opening his big mouth!

A couple wear face masks as they travel on a motocycle in Pune, one of the cities worst affected by the swine flu… 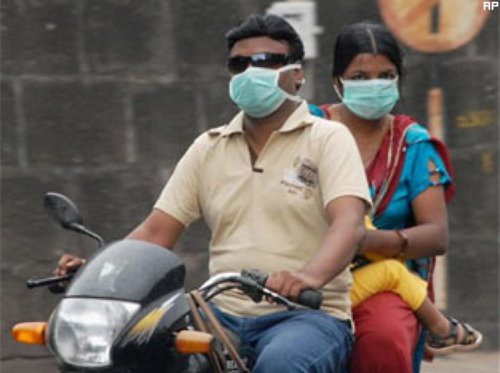 Health is a state subject in India and the state governments (along with local government authorities) have the responsibility of ensuring the health and well-being of their citizens. The role of the central government is to co-ordinate things and take measures to do things that the states cannot do. But the loudmouthed Azad wants to enjoy power without taking any responsibility and has kept spewing out nonsensical stuff to draw attention to himself. Such is the low nature of India’s worthless, crooked politicians that they don’t think of gaining political mileage out of dozens of swine flu deaths.

In a meeting of a rural health mission with state health ministers, the loudmouthed central health minister chose to flay the efforts of states in combating the swine flu pandemic. Though Mr. Azad’s utter incompetence has actually aided in the flu spreading rapidly across several cities, he decided to put the blame on the state health ministers saying “he could do only so much” and that “one should not expect him to go beyond a point”. Thankfully, the health minister of the state of Gujarat, JN Vyas, had the guts to tell the loudmouth to stop the nonsense. He reportedly told Mr. Azad, “We are not here to listen to these words. You are a federal minister and we look forward to your co-operation.” Three cheers for the Gujarat health minister JN Vyas! 🙂

It seems Mr. Azad simply cannot keep his big mouth shut. Like an empty vessel that is devoid of any stuff, he keeps making the maximum possible noise and the notorious Indian “mainstream media” that is eagerly waiting for stupid things to keep dishing out around the clock, lap up Mr. Azad’s ridiculous statements. It should be noted that Mr. Azad has no kind of experience whatsoever in the medical field and like many others, he became a minister only because of his ability to faithfully lick the boots of a certain lady who controls all her puppets, including the blue-turbaned one, by means of iron strings. As soon as he assumed charge, Mr. Azad immediately did great damage to the health of millions of Indian citizens. Paid by the notorious tobacco lobby    👿   that also has some prominent film “stars” from one particular regional film industry (Bollywood) on its payroll, Mr. Azad virtually overturned the ban on on-screen smoking that was put in place against all odds by his predecessor – a trained physician who dared to take on this dangerous lobby and their cronies in the “mainstream media”. The tobacco lobby rejoiced since they could now go back to spreading the curse called tobacco to harm India’s youth and children, not to mention millions who suffer because of the ill effects of second hand smoke.

When the swine flu virus began killing people, affecting some cities so badly that schools had to be shut down for a week, Mr. Azad once again found it impossible to restrain his big mouth. In a shocking incidence of insensitivity, the health minister insulted an unfortunate little girl who had died of swine flu complications.   😯   He blamed the dead girl for “spreading the virus”. Understandably, 14-year old Reeda Shaik’s parents were outraged and demanded his resignation. Mr. Azad was forced to apologise for his callous remarks.

Now, what has Mr. Azad actually done to stop the spread of swine flu? Very little! In fact, his ignorance of the dangerous nature of the flu and his incompetence actually helped in spreading the virus to all parts of the country. Unlike Mexico, the United States and many other countries that reported the outbreak of swine flu months ago, India was free from this scourge. Instead of taking measures to stop the virus before it affected people, Mr. Azad chose to play the fiddle. He neither co-ordinated the establishment of a sound response system nor did he take measures to increase the screening and testing facilities. On the contrary, he made sure that the one could not access the common drugs to treat swine flu, Tamiflu and Relenza, because the government was hoarding them. He took no measures to increase the production of either these drugs or face masks. The sale of face masks has degenerated into a racket with unscrupulous traders hoarding them, creating an artificial shortage and selling the masks at inflated prices. Screening systems were not put in place at airports to detect people who were infected. All airports are managed by the incompetent central government and even a few days back, my friend told me that he was not screened when he landed here. So much for the loudmouthed minister’s proclamation that “he could only do so much”!

I guess if Mr. Azad chose to put in even a fraction of the effort in his work as he does in opening his big mouth, the H1N1 swine flu would not have infected and killed so many people.       😐

5 Responses to Swine flu pandemic: loudmouth Azad needs to shut up and do some work for a change!