Why on Earth are so many animals dying en masse?

It’s yet another of those things the notorious scoundrels working for the controlled “mainstream media” establishments don’t want you to know. They’re doing their best to cover it up, make all these recent mass animal deaths around the world sound like petty isolated incidents or are offering absolutely ridiculous “explanations” that even a dimwit with half-a-brain would know are false. If one ever gets to learn the true scale of these recent mass animal deaths, then one would naturally begin to ask questions and start searching for answers.

Questions that the controlled “mainstream media” clowns don’t want you to ask. Answers that the information peddlers don’t want you to learn under any circumstances. A delightfully addictive state of non-thinking brainwashed ignorance is what “the powers that be” (TPTB) have decided to keep the masses in. A non-thinking state in which the ordinary masses of slaves begin to enjoy their own enslavement so that the “elite” hordes can continue to do what their ilk have done since the beginning of human civilisation – oppressing the masses, manufacturing “crises” in order to concentrate more and more power in fewer and fewer hands, creating imaginary enemies, going to war, shedding massive amounts of human blood (only that of the expendable sheeple and mercenary thugs, of course), looting resources, destroying environments and setting humankind back on the path to the Stone Age.

Some of the “explanations” offered by the controlled “mainstream media” information peddlers would be hilarious, if they were not so preposterous – such as “New Year fireworks” or a possible “collision with an airliner” 🙄 causing these mass bird deaths. New Year fireworks! 😆 The shameless fellows! 😡

Note what the so-called “officials” are explaining it away as, faithfully repeated by their boot-licking information peddlers – “cold stress” 🙄 Outrageous as it sounds, let us for a moment assume that two million fish suddenly died of “the cold” in the USA (in the Northern Hemisphere). Did 100 tons of fish (yes, 100 tons of ’em 😯 ) also die in Rio de Janeiro, Brazil (in the Southern Hemisphere) because of “the cold” at the same time of the year 😕

No, they don’t think the sheeple are that dumbed-down, as of now. The “mainstream media” news mongers are blaming it on “an algal bloom”

Third, there are plenty of other suspicious mass animal deaths, too. For a great website containing the links to all these mass deaths, this terrible aflockalypse as they term it, take a look at this page here. I guess they’ve stopped updating the page a while ago, but the mass die-offs continue unabated. The comments section does contain updates (with links) by readers from around the world though, as does this constantly updated page. Here is a map showing the mass die-offs: 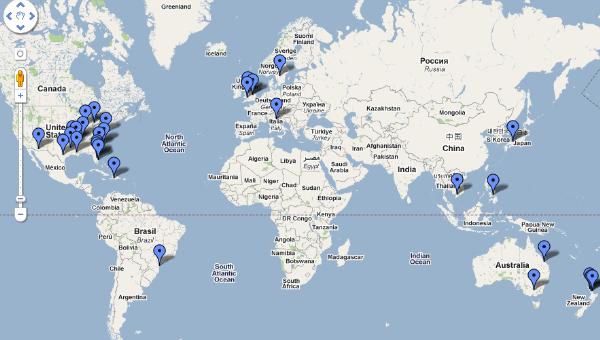 Fourth, they don’t wan’t you to notice something, ahem, fishy about it. (That putrid, unbearable stench of rotten fish 😮 ) Except for one or two, most of the mass deaths have taken place within a certain latitude range on both sides of the equator. But one cannot but help notice that the bulk of these mass deaths have occurred in one particular region of the globe. The very same region, where not too long ago, a certain petroleum corporation was responsible for a furious, uncontrolled oil gusher that released God-knows-how many (kilo?/mega?/giga?/tera?)litres of crude oil into the Gulf of Mexico and the Atlantic Ocean. And then satanically covered it up with a little help from Uncle Sam and his goons in the District of Criminals, by using deadly chemicals (what was that thing called, corexit?) and a total black out and control of any kind of information, thanks to the controlled “mainstream media” news peddling jokers. I wonder if the ocean currents and migratory pattern of birds would be able to link more deaths in other places to the Gulf of Mexico disaster?

There are so many plausible theories floating about the web (not counting the ridiculous ones dished out by TPTB and their media boot-lickers), that I’m not sure which one (or which combination of ’em) is true. The Bee Pee goons are a prime suspect, considering the geographical location of many of these sudden, inexplicable mass deaths. But the greed, incompetence and criminal negligence of the Big Oil bashi-bazouks (and their backers in the form of certain Wall Street crooks) isn’t certainly the only possible explanation.

Remember the Mayan calendar and all that 2012 stuff? Some are offering the explanation that these mass deaths can indeed be explained by a pole shift that is beginning to occur, with the changing magnetic field of the Earth causing these deaths either directly, or indirectly. Or due to increased solar radiation, or a combination of both. Though possible, it doesn’t sound too convincing to me.

These mass deaths being caused by HAARP is another theory that is floating about. Yet another one links it to a diabolical experiment with chemicals (chemical weapons?) that is deliberately being covered up. What gives some degree of credibility to this theory is that there is one man who could have explained it all, exposed all that has been happening to the public. And he is now dead, just like those poor birds and fishes. As you may suspect, he didn’t just die. He was brutally and sadistically murdered in cold blood, but not before being drugged and robbed of his briefcase (containing incriminating documentary evidence against TPTB?)

It was a stern message from TPTB to any potential insider like him who would feel troubled by his/her humane conscience that (s)he is being part of a diabolically evil plot against the welfare of humankind and consider going public with the info. No, they aren’t fake, set-up “whistleblowers” and disinfo/psy-ops agents in the pay of TPTB like that hero-to-zero-to-hero-to-zero Julian “Cablegate” Assange and his Wiki dumps. These are the real whistleblowers with real inside information that could expose TPTB. And as is expected of all such true whistleblowers who are about to go public, they either end up “dead under mysterious circumstances”, “commit suicide” or “die in an accident”. Dead men tell no tales, you see.

Listen to this news report, which of course, is not going to tell you the possible links between his brutal murder and what has been going on. You will have to look elsewhere for that. With the fe(de)ral thugs of the FBI rushing in to “assist” the police with investigations, one can bet a thousand tons of fish that a massive cover-up is in the works, whether John Wheeler’s murder is linked to the mass animal deaths or indeed, to something else.

Natural or man-made, what do all these sudden, inexplicable mass animal deaths taking place at the same time possibly mean for humans 😕 Heard of the canary in the coal mine?

If it is birds and fish today, it may indeed be humans tomorrow 😐 Come to think of it, this deliberate under/incomplete/misleading reporting by the controlled “mainstream media” news-mongers is only to be expected. If these lowly, shameless, voraciously boot-licking, controlled media morons can deliberately under-report and brush under the carpet the willful mass-murder and genocide of humans in the filthy, satanic turd world shit pits of the world, then what do they care about animals and birds? Hopefully, whenever the theoretical natural/man-made/divine mass cull of humans takes place in the future, the worst fate would be reserved for the vile falsehood mongers among the controlled “mainstream media” lowlives 👿

Let’s not forget the ones who believe in religion and the prophecies of old. The believers think these mass animal deaths are indeed a sign of the times. From Hosea 4:2-3

There is only cursing, lying and murder, stealing and adultery; they break all bounds, and bloodshed follows bloodshed. Because of this the land mourns, and all who live in it waste away; the beasts of the field and the birds of the air and the fish of the sea are dying.

Be silent before the Sovereign LORD, for the day of the LORD is near. The LORD has prepared a sacrifice; he has consecrated those he has invited. On the day of the LORD’s sacrifice I will punish the princes and the king’s sons and all those clad in foreign clothes. On that day I will punish all who avoid stepping on the threshold, who fill the temple of their gods with violence and deceit. “On that day,” declares the LORD, “a cry will go up from the Fish Gate, wailing from the New Quarter, and a loud crash from the hills. Wail, you who live in the market district; all your merchants will be wiped out, all who trade with silver will be ruined.

At that time I will search Jerusalem with lamps and punish those who are complacent, who are like wine left on its dregs, who think, ‘The LORD will do nothing, either good or bad.’ Their wealth will be plundered, their houses demolished. They will build houses but not live in them; they will plant vineyards but not drink the wine. “The great day of the LORD is near–near and coming quickly. Listen! The cry on the day of the LORD will be bitter, the shouting of the warrior there.

That day will be a day of wrath, a day of distress and anguish, a day of trouble and ruin, a day of darkness and gloom, a day of clouds and blackness, a day of trumpet and battle cry against the fortified cities and against the corner towers. I will bring distress on the people and they will walk like blind men, because they have sinned against the LORD. THEIR BLOOD WILL BE POURED OUT LIKE DUST AND THEIR ENTRAILS LIKE FILTH! Neither their silver nor their gold will be able to save them on the day of the LORD’s wrath. In the fire of His anger the WHOLE WORLD will be consumed, FOR THE LORD WILL MAKE A SUDDEN END OF ALL WHO LIVE ON THE EARTH!”

Alas! The only issue here is that the Bible prophecy seems to have already been carried out in the past 😦 on ancient Jerusalem and its hordes, and may not exactly be a sign of the current times. But who knows? 2012 or not, there still seems to be a chance left, even if it is a slim one 😐

So what do you think of the terrible aflockalypse and about it being a possible sign for TEOTWAWKI?

5 Responses to Why on Earth are so many animals dying en masse?